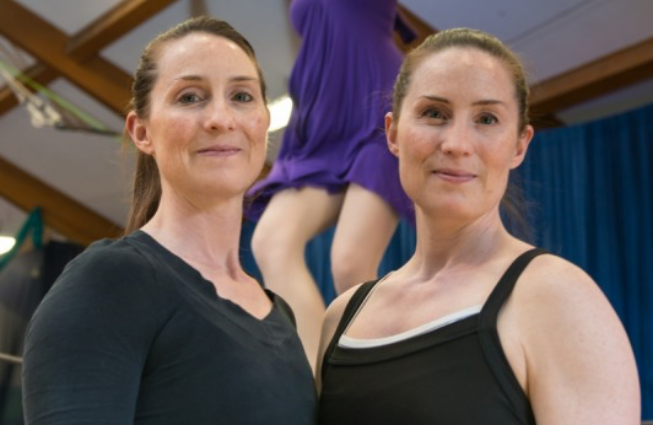 Elsie and Serenity are identical twins specializing in aerial acrobatics whose teaching & performing resumes include a broad spectrum of circus and performing companies in the US and beyond. From their childhood as tree climbing book worms growing up in Western Massachusetts, they took their passion for hard work and adventure into long running careers in the circus arts. Their shared resumes include performing for Cirque du Soleil, Ringling Bros. & Barnum & Bailey Circus, the New Pickle Circus, Cirque Productions and Cirque Le Masque.

As instructors they have been instrumental in creating the modern pedagogy for aerial arts, and broadening the depth of circus arts instruction to include injury prevention and core training. Their teacher training for aerial instructors is one of the first programs of its kind in the world.

At the beginning of their careers they split their time between teaching and performing. Serenity helped found the San Francisco’s Circus Center, then while performing on Cirque du Soleil’s Saltimbanco served as Pilates captain and working closely with physical therapists to promote injury prevention & rehabilitation among other artists. Elsie earned a coaches certification in trampoline & has choreographed for the UGA Dance department, Circus Smirkus, & Sea World. Together they brought a technical circus training approach to aerial dance Festivals in the United States, England and Ireland.

In 2003 the sisters settled in Vermont and founded their company Nimble Arts to offer performances and aerial teacher training. They later added a professional training program for aspiring circus artists. In 2007 Nimble Arts was awarded first place in the Brattleboro Development Credit Corporation Business Plan competition, and later that year the permanent school portion of the organization was granted not for profit status as its own entity – the New England Center for Circus Arts.

NECCA has since grown to be the most comprehensive circus arts training school in the United States, offering classes to recreational & professional students of all ages, including the longest running professional training program in the US. Elsie and Serenity continue to serve as Directors of the school they founded while maintaining performing and teaching careers that take them all over the world as consultants, teachers and entertainers.